Late Swap vs No Late Swap & How To Manage Both 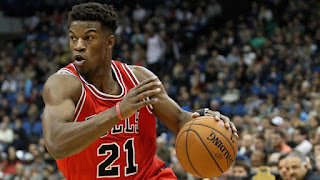 (Jimmy Butler caused many daily fantasy players problems when he was scratched from a game after lineups locked on February 4th 2017.

Week 5 is in the books. Last week I finished with a nice profit! Let's see how I did this week!

This week started off with a small loss on Tuesday. On Wednesday I had a small win. On Thursday I had another small win. On Friday I had a nice win. On Saturday I took a big loss in MMA. I didn't play Sunday or Monday. All in all I finished the week with a very tiny profit.

Here were my results for week 5:

Today I want to talk about the concept of late swap vs no late swap and how it impacts how you play the game of fantasy sports.

When you play fantasy sports there are two types of rules that you can play under when it comes to setting lineups. The first is late swap. The second is no late swap.

If you are playing under late swap rules this means you can make changes to a position in your lineup for that sport right up until the time that the game starts. So for instance if you have Carmelo Anthony in your lineup and The Knicks play at 8:30pm local time you can replace Carmelo Anthony with any other player at his position who also hasn't started their game yet until 8:30pm. After that, he is locked in and you cannot change him anymore.

If you are playing under no late swap rules this means once the FIRST game that is a part of that game slate begins...you can no longer make any changes to your lineup. You are locked in and whatever happens...happens.

For a long time one of the biggest differences between DraftKings and it's largest competitor (prior to them merging that is) FanDuel was the rules about late swap. FanDuel did not allow late swap at all. DraftKings allowed it.

So this year for the NBA season DraftKings changed its policy and no longer allowed late swap for basketball only. Their thought process is that casual fans want to be able to set their lineups by 7:00pm and just watch the games.

The problem is out of all of the major fantasy sports basketball is the game that you need late swap the most! The reason why is because there are so many last minute scratches in basketball if you don't have late swap you are at some point going to select a player who is a last minute scratch. In sports like baseball, hockey, even football a little bit you can survive a zero in your lineup. In basketball, if you get a zero you are almost certainly going to lose that night.

Sure enought DraftKings fans were INFURIATED when experiencing numerous incidents where their players were ruled out at the last minute and completely wrecking their lineups!

This was just a bad idea by DraftKings. While you want to appeal to the casual fan it's most important to keep your serious players happy because they spend the most money! Removing late swap simply pissed the serious player off!

When you enter a contest that allows late swap, this offers you several advantages and one key disadvantage.

The biggest disadvantage that late swap creates is if you want to just set your lineups up until the beginning of the contest and then do something else, other players who are more active can take advantage.

What are some of the advantages that late swap offers you?

The first and most obvious benefit is it gives you the ability to take out players who you find out will not be playing the game. For example, you might not find out whether certain players in the later games are going to be playing or not. If you have late swap, you don't have to worry about that because you can always swap them out if they don't play.

Another benefit is you can make adjustments to your lineup based on how your other players are already playing. For example, if the players you are playing currently are having a bad night, you may want to swap out and take some higher risk higher reward players.

You can also use late swap to give you an idea on what players are going to be highly owned. For example, if you see that a high salary player in the early game is 40% owned and there is another high salary player scheduled to play later, there's a good chance that this player might be lower owned. You may want to pivot to that second player because if they have a great game, they will be lower owned and increase your chances of having a more unique lineup.

When you are playing in a contest that does not have late swap, there are some risks that you have to account for when making your lineups. For example, if you play players who are going to play in later games, you must understand that there is a risk that some of those players might not play the game. This is because the news on the status of those players won't come out until after lineups lock.

If you play players who are questionable, those players are also being played at a risk. If their status will not be resolved until after the lineups lock, if they are ruled out you will not be able to switch them out. This will give you a zero in your lineup and unless a lot of people have that player a zero more than likely means you are going to lose.