The Importance of Defense Vs Position In Fantasy Basketball 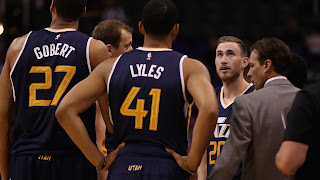 Week 3 is in the books. Surely it had to be better than that disaster that was week 2 right? Let's find out!

Like last week, this was also a mostly NBA week. On Tuesday, I was FINALLY able to break the losing streak in NBA. Wednesday and Thursday I took some losses. Friday, however was a decent day and I was able to make up some ground and then some! Saturday, however, was a bad night and I lost most of that ground I made up. Sunday and Monday I finished with some small losses to close the week with a very tiny loss.

This week I actually finished with a small win on the NBA side. However, the small loss that I took on the NFL side wiped away the small gains that I had on the NBA side. The NFL season is now officially over (No I will NOT be playing the Pro Bowl/Super Bowl slate, what do you think I am a degenerate? lol)

Here's my results for week 3:

This week, I want to talk about the importance of analyzing defense vs position when drafting fantasy basketball players for your team. It is not enough just to pick the best players based on their price. You want to also look at how the team they are playing against matches up.

Let me give you an example...

Let's say you are building a fantasy basketball team tonight. You are looking for a player at the Power Forward position.

You see that the Denver Nuggets are playing the Utah Jazz tonight.

The game has an over/under of 211.5. That means Vegas expects both teams to have a combined score of that amount. That is actually a very good over/under.

Reduced salary for a player who has scored as much of 48.25 fantasy points in one game. That seems like a good play in theory right?

However, if you take a look at defense vs position rankings, you will see that the Utah Jazz has a DVP rating of #1. This means that Power Forwards average the LEAST amount of fantasy points against them than against ANY other team in the NBA.

This is a bad matchup for Kenneth Faried even with the reduced salary. He is not someone that you will want to play tonight because he is in a bad defensive matchup.

Does that mean you shouldn't play him at all?

Not necessarily. Defense vs Position is only one of the many factors that you want to look at. However you definitely want to look at it and in this case, this is a negative factor to playing Faried tonight.

On the flip side, George Hill from the Utah Jazz is the point guard. If you look at Denver's Defensse vs Position, the Nuggets have a DVP rating of #29. This means that out of 30 NBA teams, only ONE team allows more fantasy points on average to point guards than the Nuggets.

This is actually a good matchup for George Hill tonight.

Make sure that you consider defense vs position when factoring in who you want to play.

There are a number of websites where you can find defense vs position statistics. Here is one that shows it for both FanDuel and DraftKings.