Game And Opponent Selection: Don't Lose Before You Even Play

This is my first full week of playing exclusively fantasy basketball. Now that the NFL regular season is over, I'm done with football. Some people like playing the playoff slates, but that's not really my cup of tea personally. I would rather turn my full attention to playing basketball.

Let's start off with how I did for the week:

Because I will be doing this for the entire year and during football season the slate goes from Thursday to Monday, I'm going to track the weekly results from Tuesday to the following Monday. So here we go.

The vast majority of my games were in the NBA this week. I played 2 games of PGA due to the fact that I won a free entry into a PGA tournament. I know nothing about PGA, so I just did some research and see who the top PGA players were recommending. Then I picked those players. The prize was DraftKing dollars, or if you were in the top 3, you won your very own customized VIP local sports experience. So for instance, as a Knick fan, I could get front row seats to a Knicks game and potentially go to the back and meet the players.

I played one game of NFL because I won an entry into a free NFL game due to winning my Yahoo Season Long fantasy sports championship. I finished in the top 43% for PGA, you needed to be in the top 2% in this particular contest. As for football, it's a 3 round contest and I'm currently in the top 27% I need to be even higher than the top 1% to win this.

As for NBA, I finished the week with a small loss, at -5.1% ROI. I started the week off with 3 straight profitable nights. However, I finished the week with 4 straight losing nights, which resulted in a loss. I am also at a loss for the month because at the beginning of the month I entered a big New Years tournament and maxed entered a small arcade tournament and had a really bad night. So we are down for the week and the month. Fortunately we still have 51 more weeks left to go!

This week, I want to talk about a topic that's not often talked about but is something that is very important. Particularly if your goal is to earn a long term profit in fantasy sports.

That topic is game and opponent selection.

Let's start with beginners. Those of you who are brand new to the industry.

DraftKings (and most fantasy websites) have a slate of games that they allow you to participate in as a brand new player called "Beginner Games." To be considered a beginner, you have played less than 50 games in that particular sport.

If you are a beginning I HIGHLY RECOMMEND that you TAKE ADVANTAGE OF THESE GAMES!

Why play against the best of the best when you can limit yourself only to other newcomers who are just like you?

If you are a beginner, one way you can maximize your chances at profit is by making sure that your first 50 games are exclusively beginner games.

As an experienced player, if I see a beginner in the main game lobby, I will scoop up in there and I will take ALL of their games. You want to swim in the ocean with the sharks? Prepared to get eaten alive!

For example, this beginner had 5 games in the lobby. I scooped up all five games. Needless to say, it did not go well for him or her...

Don't let this be you! Stick to the beginner games for your first 50 games.

What happens after you complete 50 games? You STILL don't have to play against the big boys yet. That's because DraftKings has ANOTHER group of games designed just for you as well. They are called Casual games. 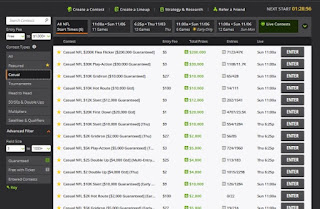 Like beginner games, you get a separate tab of games for these casual contests. You are eligible to play in these games as long as you have less than 500 games played.

If you have played less than 500 games, I recommend that you stick to the casual games. I will scope out casual players as well in the main games and if I find one, I will pick up those games and beat you.

Once you reach 500 contests, you are no longer a casual player. At this point, now you have to enter the main slate of games and play against everyone else. However, even in the main lobby of games there are things that you can do to maximize your opportunities to profit.

My first recommendation deals with Head to Head games.

NEVER create your own HEAD TO HEAD games!

When you create your own head to head games, you have no control over who your opponent will be. Highly experienced players like myself can simply look in the lobby, scope you out and take your games.

However, if you instead CHOOSE your own games, you now have full control over who you play.

How do you decide which opponents to play?

By looking at the players experience badge!

DraftKings rates each player based on their level of experience on the site. Here is the system that they use: 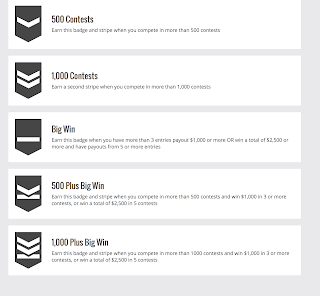 Once you have reached 500 contest played, you are awarded the "500 Contest" experience badge. This is the first badge that you are eligible to earn. Earning this badge also makes you no longer eligible for casual game contests.

The fourth level is 500 Plus Big win, which combines the 500 contest and the big win.

The fifth and final level is 1,000 Plus Big win, which combines the 1000 contest and the big win.

When you go to the head to head lobby, you can see a list of all available contests for the sport you are playing like this...

What MOST players do is they look for the dollar amount that they want to enter. They hit the ENTER button. They create their lineup and they submit.

When you do this, you are creating your own contest, which either gets automatically matched up with someone else OR can be picked up by somebody else. This is not what you want to do.

Instead, you see the column that says "Available Contests?"

If you hover your mouse over the number of "available contests" for the level that you want to play, it becomes a hyperlink and you can click on it. When you click on it...it brings you to another screen like this... 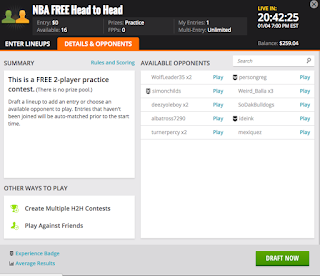 At this screen here, you can just locate the opponent that you want to play and click on the "Play" link next to their name.

So how do you decide who to play?

Look for players with either NO experience badge like this...

If you notice "Buge357" and "big-al72" have no experience badge. That means they are either beginner players or casual players. If you followed my instructions above, you should be at a bare minimum, be at a casual level. The no experience badge players are at a lower level than you so you can challenge them.

Many times you won't have anyone who has no experience badge. In that case, look at the badge levels I posted above and choose the player that has the lowest badge.

Sometimes, you will come across a scenario where EVERYONE has the highest experience badge. What do you do then?

Do a search for contests in higher dollar amounts from the contest you are playing. Some of the players will be in those contests. Others will not. The ones that are not are likely the less experienced of the experienced and are the players you want to focus on.

By focusing on the least experienced players this will maximize your ability to win. No need to play the best players if you don't have to.