Floor vs Ceiling Players: How to Tell the Difference 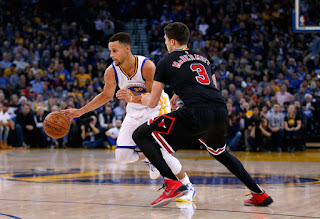 This is why it is SO IMPORTANT that you practice good bankroll management skills. The reason why I can handle a losing streak for that many nights consecutively is because I protect my bankroll by only playing a portion of it every night. So when I lose money I am playing LESS money and when I win money I am playing MORE money.

Saturday I took off and didn't play at all. I took my daughter to American Girl for her birthday and brought her a brand new American Girl doll! She was ecstatic! For at least one day this week, I was a winner!

Sunday night was UFC Fight Night Phoenix. I only played Tournaments that night because I was really busy this weekend. However, I had a great night and was able to cut into some of these losses a little bit. Sunday was also round 2 of my football contest. I finished 30,365 out of 142,171. I have one final chance next week to Crack the top.

Monday was back to NBA and back to more losing! Definitely one of the WORST NBA weeks that I can recall ever having. It happens! Fortunately there are still 50 more weeks left to go in the year!

In today's article I want to explain the difference between two types of players that you will be drafting on your fantasy teams. This concept is relevant in every sport and it is a foundational concept that you want to understand if you want to become a good fantasy sports player.

The concept is high floor vs high ceiling players.

All fantasy players accumulate fantasy points for each contest they are a part of. If you look at their historical performance from their previous contests you will see how many fantasy points they scored.

For example Doug McDermott's last salary was $3,900 on DraftKings. 7.5 is a very low floor because at a salary of $3,900 that means he only scored 2 times his price value. You typically need on average 5 times a player's price in fantasy NBA to have a profitable night in cash contests. Stephen Curry's last salary was $9,000 on DraftKings. At that salary, his 28.75 is good for at least 3 times his price value. That gives him a higher floor than Doug McDermott.

For example, in any contest where you have a 50% chance of winning (i.e. head to head and 50/50 contests) you want to have a lot of high floor players. Your objective isn't to have the highest scoring team of the night. Your objective is to have a team that will outscore half the other teams competing that night. As a result, you want to pick players who are likely to score a certain number of points.

In a contest where you need to be in the top 20% to win, you want to take more chances on high ceiling players. Those players could bomb and sink your lineup. However, if those players have a big night, they could be the difference between you winning that night and you losing.