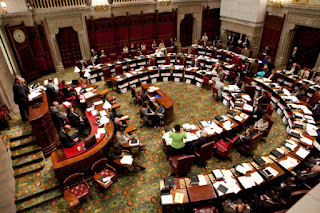 On Friday, June 19th, the New York Assembly passed a bill to make fantasy sports legal in the state of New York. Officially titled: AN ACT to amend the racing, pari-mutuel wagering and breeding law, in relation to the registration and regulation of interactive fantasy sports contests. The bill passed in bi-partisan fashion by a vote of 91-22.

On Saturday, June 20th, the New York Senate also passed a bill to make fantasy sports legal in the state of New York. On the senate side, the bill also passed in bi-partisan fashion by a vote of 45 to 17.

The ball is now in Governor Andrew Cuomo's court. All he has to do is sign off on the bill and fantasy sports will once again become legal in the state of New York.

In the first round, the judge ruled in the favor of the Attorney General. However, a panel of judges ruled in favor of the fantasy sites. The site operators remained open in the state of New York during this time period. However, they eventually struck a deal with the attorney general agreeing to cease operations. In return, the AG agreed to drop the lawsuit if the New York Legislature and Governor signs a law legalizing fantasy sports.

The Legislature has done its part. Now it is up to Governor Cuomo to do his part and sign the bill into law.

Assuming Governor Cuomo signs the bill into law...his spokesman commented today saying that the bill is "under review" the fantasy sports websites would need to register in the state. However, all sites that were operating in New York prior to the shutdown will be able to launch again as soon as they register, without having to wait for their site to get approved. New websites however will need to wait for approval.

From a personal standpoint, this is very exciting news to me. Currently, the only way I can play is when I am outside of New York City. I typically go to New Jersey and Connecticut a few times a month so I can play over there. However, that is nowhere near the amount of time I use to play and it has hindered my ability to earn an income playing the games I love.

There is also a matter of momentum. Being able to play daily and doing daily research gives you a significant advantage because you are able to spot trends. By only being able to play periodically I am not able to take advantage of this.

I am looking forward to Governor Cuomo signing the bill into law and am hopefully optimistic that the sites will be back up and running in the state of New York by July.

In the meantime, here is what I will be doing and what I recommend that you do if you are in New York and are awaiting for the Governor's signature and for the sites to get up and running.

Over the next several weeks, I will be posting a number of articles to help you get up and running so that you can be successful. I'll be talking about baseball and mixed martial arts because those are the two sports I play right now. Once football season starts in the Fall, I will start writing articles about that.

My name is Roosevelt Cooper and I am the founder and editor of this blog. I have been playing fantasy sports casually for over 19 years. I was introduced to the concept when I was 18 years old in college. I started off competing online on Yahoo Fantasy Sports. My first sport was a fantasy baseball league.

As a sports fan, fantasy sports was a match made in heaven for me. As a child I was a huge sports fan and still am today. I was never good enough to play at a high level to have ANY chance of going professionally. However, I was always very knowledgeable about the games. In High School I was the sports editor for my school newspaper. One of my biggest regrets to this day was making the decision to go into information technology as oppose to going into sports journalism. Had I known about the proliferation of ESPN and sports back in 1996, you might be seeing me arguing with Stephen A Smith or Skip Bayless right now!

In any case, in my first year of college, I was introduced to fantasy sports. I started off by playing fantasy baseball on the Yahoo Fantasy Sports website, which is still in existence today. I eventually branched off to playing fantasy basketball, fantasy football, as well as fantasy e-wrestling. I stopped playing e-wrestling after college. However, I continued to play fantasy basketball, baseball and football after college all throughout my adult years.

I eventually started playing in "money leagues." Money leagues are season long fantasy leagues where each participant pays an entry fee and compete for a cash prize. For many years, I played in both leagues for fun as well as leagues for money.

In 2014, I started seeing advertisements for daily fantasy sports leagues. Unlike season long leagues where you complete for a full season, daily fantasy leagues are one day leagues where you complete for cash prizes. I started playing on a site called DraftDaily. It was a lot of fun and I even won some prizes as well. I eventually moved over to DraftKings and started playing on there.

In 2015, I made a decision to take this a little more seriously. I set a goal to be able to begin to earn a living from playing fantasy sports. I was fortunate enough to be able to turn a $100 initial investment to over $1700! I took $1000 out and I have been playing with my profit ever since!

In 2016, I was really excited of being able to play my second full year. Unfortunately the attorney general of the state of New York where I live announced that Daily Fantasy Sports is illegal. So I currently have only been able to play whenever I go out of state to New Jersey or Connecticut. However, the good news is that the New York legislature is working furiously to bring fantasy sports back to New York. I anticipate that by the end of this month, daily fantasy sports will be legal once again in New York.

On this blog, I will be sharing with you strategies, tactics, news, stories and my personal experiences in my journey as a fantasy sports professional. I hope that this blog will serve as a source of inspiration for you if you desire to play fantasy sports for profit as well.

Posted by Unknown at 1:23 PM No comments: