What Does A Million Dollar Fantasy Football Lineup Look Like? 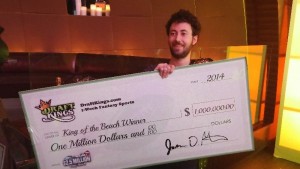 Congratulations to Eytan Jankowitz and Aaron Merchank on winning the
King of the Beach $1,000,000 Fantasy Football Prize with Draftkings!

Yesterday, 50 fantasy football players competed live in the Atlantis Resort in the Bahamas for a grand prize of One Million Dollars! The winners are actually a couple of long time friends, Eytan and Aaron! They decided to partner up together and build fantasy sports teams together. Interestingly enough, these two gentlemen are actually better on the basketball side of the daily fantasy sports world. However, it just goes to show that if you put together the right lineup on the right day and the right time, you can win it all!

They have been playing fantasy sports professionally now for almost a year and a half and now they get to add a million dollars to their career earnings, not counting whatever money they have made up until now. That’s pretty amazing! Imagine making a 7 figure income picking out professional athletes? That’s got to be a dream come true for any die hard sports fan!

So what does a million dollar fantasy football lineup look like?

Here is the lineup Eytan and Aaron used to earn themselves a million dollars yesterday! 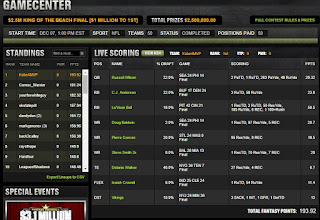 So in this case, the million dollar lineup was formed by investing most of the money in the Quarterback and Running back positions. These top tier players all performed well, especially in the case of Le’Von Bell, whose performance was nothing short of spectacular.

In order to be able to afford these players, the money was saved by acquiring low priced players at the receiving and tight end positions, targeting guys who they believed would perform at a minimum of 4 times their price/production value.

With the exception of the TE and the FLEX position, they were completely correct on their bargain players. All of them scored at a minimum above 4 times their price/production value.

When you build a team that has 3 studs who perform, combined with solid undervalued picks, you have a recipe for a winning team.

In the case of this team in particular, Eytan and Aaron had a MILLION dollar recipe.