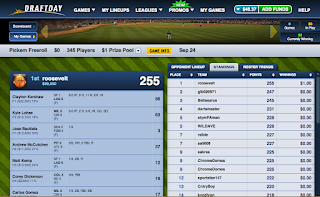 So I’ve been playing daily fantasy baseball for about three weeks now. The first two weeks I spent learning and understanding the game and figuring out my strategy. I finally finalized my strategy and daily research routine towards the end of last week.

So this week is my first week fully utilizing my daily research routine.

Last night, I achieved my first MAJOR milestone in my journey to become a fantasy sports professional.

You can make OK money grinding it out playing head to head and 50/50 matchups. These are games where you basically have a 50% chance of winning. However, the best you can do in these types of matchups is win an additional 80 cents for every $1.00 you pay towards an entry fee. If you want to make the BIG money however, you are going to have to win what are known as Guaranteed Prize Pools!

So last night I entered a freebie guaranteed prize pool.

Here’s a VERY important tip for you. Write this down.

A freebie matchup is a match where there is NO ENTRY FEE! That means it costs you NOTHING in dollars to enter this matchup. However, despite the fact that it is free, there is still a prize for the winner. Some of them have really small prizes. Sometimes they might have a larger prize. However, there is nothing to lose and everything to gain by entering a freebie matchup.

So the one I entered last night, the prize was only $1. I competed against 345 other players.

Only the person who finishes first place wins the $1. Everybody else gets nothing.

In this particular game, each player is allowed to enter up to THREE teams. So I entered my three teams.

That brings up ANOTHER very important tip. Write this down.

If the freebie game allows you to enter up to 3 teams, make sure you enter 3 teams. All this does is increases your odds of winning.

So I entered three teams into this particular matchup. All three of my teams did very well.

My second team finished 15th out of 345, which is incredible!

I WON THE GUARANTEED PRIZE POOL!!!

This is huge because in only my third week playing, I was able to get a first place finish and win a prize pool beating out all of the other teams that were competing against me. This is a HUGE accomplishment for someone just getting started. There are people who have been playing this game for MONTHS or even YEARS and have never won first place in a prize pool before.

It is very important that you have a research routine and that you maximize the opportunities that are available to you. Doing so will help you to maximize your wins and minimize your losses in fantasy sports!